※ This article is for junior high school students and above.

What is acid rain?

Why are they called global environmental issues ? It's because their impacts and damages affect not only the countries that caused the problems, but go beyond their national boundaries and can reach a global scale. It's also because these are problems which require international efforts for solution.

These problems are inter-related in a very complicated manner. For instance, burning of fossil fuels, such as oil and coal, increases emissions of carbon dioxide that cause global warming, and at the same time, emissions of sulfur dioxide and nitrogen oxides, the major pollutants causing acid deposition. These problems also lead to deforestation and threats to wildlife. In industrialized countries, people are producing, consuming and disposing of huge amount of products. Significant amount of resources and energy are required for the production, consumption and disposal of such products. This is one of the major causes of global environmental problems such as acid deposition and global warming.

Pollutants such as sulfur dioxide and nitrogen oxides are emitted to the atmosphere when we burn fossil fuels such as oil and coal from boilers in factories and power plants as well as from automobile emissions. These pollutants are converted to sulfuric and nitric acids and come back to the ground (acid deposition). Acid deposition takes place in two processes.

One process is wet deposition. Sulfuric and nitric acids are incorporated into clouds, and fall onto the ground in the form of rain, snow and mists. When a large amount of acid are dissolved in, rain shows strong acidity. This phenomenon is known as acid rain. The other process, called dry deposition, occurs on fine and cloudy days. Airborne acids come directly through winds, and deposit themselves on trees, buildings, and even human respiratory systems.

These deposited acids increase acidity in soil, lake water etc., then affect living creatures such as trees and fish. Their impacts depend on the amount of acid deposited more so than the degree of acidity. In other words, a large amount of relatively weak (high pH) precipitation would cause more significant impact than a small amount of relatively strong acidic(low pH) rain. It is, therefore, quite important to consider not only pH but also the total amount of acid deposition.

There are many living creatures in natural ecosystems like lakes and forests. How does acid deposition affect them ?

After rivers and lakes became acidic in Scandinavian countries, various fish species, including Atlantic Salmon and brown trout, disappeared. In the very cold winters common in Scandinavian and Northern American countries, snow with acidic substances fall in winter, and rapidly melt in spring to make rivers and lakes acidic. Salmon spawn in autumn and fry live for about half a year until spring in the rivers where they are born. Since Salmon have weak tolerance for acidity, they can not survive the snow melting seasons. 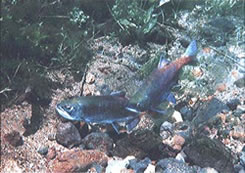 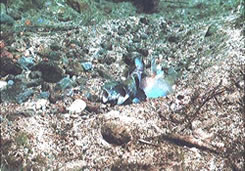 Recent Japanese research disclosed the response of kokanees, a kind of salmon, to acidity. Kokanees are very sensitive to acidity in water and stop spawning at the slightest lowering of pH (changes from pH 7 to pH 6). Although we had thought that there would be much less impacts by pH changes around pH 7, kokanees were significantly affected. Other research shows that aluminum ion, easy to dissolve in acidic water, also significantly affects fish.

Examples of living creatures that are strongly affected by acid rain

It is known that insects and shellfish, the food of fish, are affected when rivers and lakes become acidic. Acidity also affects plants in water. Several types of plant plankton change with changes of acidity, while certain bacteria and fungi (molds etc.) are more tolerable than others. 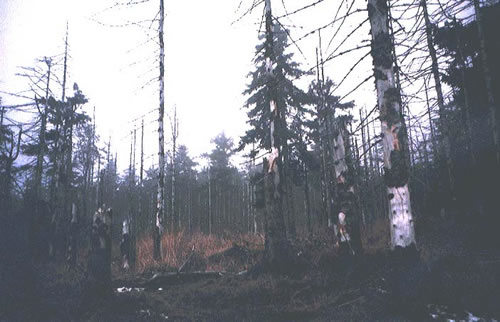 Acid deposition affects soil, water, various living creatures, and plants as well. For example, high sulfur content coal from the Black Triangle, near the borders of Germany, Czech and Poland, was a significant resource for power plants and factories. The industrial processes lead to significant emissions of sulfur dioxide, and resulted in many dead forests. Similar phenomena have been observed in Chonqing, China.

Sulfur dioxide is emitted in refining metals such as copper and nickel, which also contain high levels of sulfur. In the past, forests died in Ashio, Japan due to the high concentration of sulfur dioxide generated from copper refining. Even now, we have similar damage at various sites in the world. For example, we can observe tens of kilometers of dead forests around the metal refining factories at Kora Peninsula in the western part of Russia.

We have many cryptomeria plantations in Japan. Cryptomeria has strong tolerance for soil acidity, but acid deposition has changed the nutritional balance in the soil, and is affecting growth of cryptomeria in some parts of Japan. 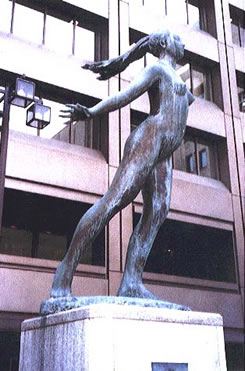 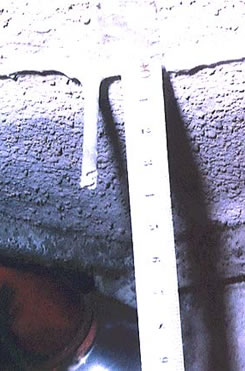 Icicles hanging from the eaves (Provided by Mr. Takeo KADOKURA)

Have you seen what appears to be icicles on walls and eaves of old buildings and highways ?

Dirty raindrops go into walls through cracks, dissolve calcium in concrete materials, and then leach out of walls. They combine with carbon dioxide in the air and formulate calcium carbonate, which grows like icicles. When we observe these "icicles", we can find dirty droplets at the top of the "icicles".

Acid rain dissolves not only concrete materials but also marble floors and sculptures, and even copper roofs and sculptures. If acid deposition continues, we will have wider damage and our environment will significantly change.

the relationship between pH value and the concentration of hydrogen ion 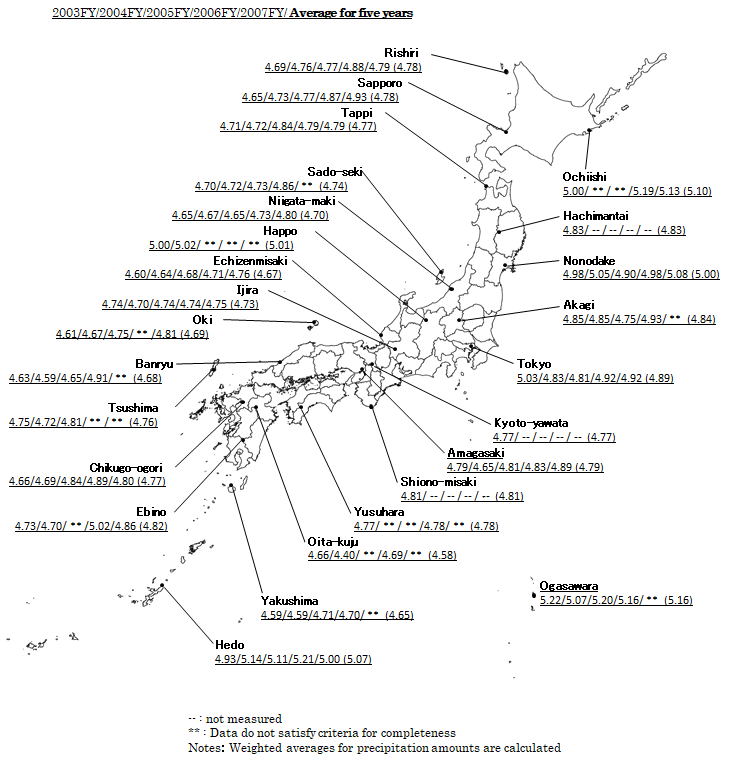 Acidic substances are mainly emitted by the burning of fossil fuels such as coal and oil. Nowadays, we don't burn coal in our daily life in Japan. Burning of oil, therefore, could be a major cause of acid deposition. It is important to reduce use of heating and automobiles, for instance. But is that enough?

Almost all items that we use are produced by using electricity. Most electricity comes from power plants where crude oil or coal is burnt. Fuels are also used by trucks, trains, ships and airplanes to transport such items. In addition, acidic substances are generated by treatment of our daily waste. Through all our activities, such as production, consumption and disposal of goods, acidic substances are generated, with particular relevance to energy consumption. The less we burn oil and coal, the less we suffer from air pollution, and the lower the level of CO2 emissions we emit, which contributes to solving global warming. In Japan, industries have been making significant efforts to reduce energy consumption. On the other hand, energy consumption in households has been increasing rapidly.

Consumption of natural resources and environmental pollution are closely related. For instance, Japan is the second biggest copper consuming country in the world, with consumption of about 1.5 million tones of copper annually. The great image of Buddha at Nara used about 500 tones of copper. In other words, we annually consume the equivalent of about 3,000 images of Buddha in copper. In the past, a large amount of copper was produced in Japan, but it has been exhausted. Now we import all the copper we use. About 40 per cent of the imported copper is to produce power transmission lines. Significant amount of sulfur dioxide is emitted through the refining processes of copper from sulfuric copper. Rivers have been polluted by copper in these processes. Pollution problems may be happening in countries that export copper. Comprehensive international cooperation is, therefore, required to tackle the acid deposition problem.